Our last event in 2015 was a visit to the General Motors Opel Plant in Vienna (Aspern). 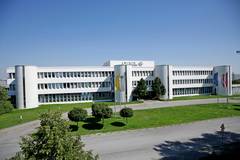 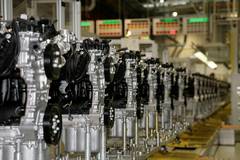 Opel Wien GmbH has an annual production of approx. 1.2 million units and is, worldwide, the largest powertrain plant of General Motors. Since its foundation in 1982, 37 million engines and transmissions have been produced at this plant.

Before starting the plant tour the trade delegates were given an introduction into the plant's history, a company presentation, and a welcome address by HR Director Mrs Barbara Schlosser.

Today Opel is one of Europe's largest automakers. It was founded by Adam Opel in 1862 in Rüsselsheim, Germany. Opel and its British sister brand, Vauxhall, sell over one million vehicles annually. In 2014 this made it the third-largest passenger car brand in the European Union.
Opel and Vauxhall are present in over 50 countries worldwide. Aspern is one of 12 General Motors plants in eight European countries.

In more than 70 percent of all newly registered Opel or Vauxhall vehicles in Europe there is a product made in Aspern, the trade delegates were told. Since the beginning of production at Aspern, Opel Vienna has continuously set standards regarding quality, reliability and productivity, trendsetting with the implementation of downsizing technology. With its annual production of approx. 1.2 million units, the Opel Wien GmbH plant is the largest powertrain plant of General Motors worldwide, occupying about 600.000m².

Back in 1912 Vienna's first airport was built on this site; one of the biggest and most modern in Europe at that time. Zeppelin airships landed here on several occasions. During the two World Wars the airfield served as an air force base. Due to the gradual enlargement of Schwechat International Airport, the Aspern airfield was finally closed down in 1977. The runways were subsequently used by amateur pilots, for pilot training and for motor racing.

The laying of the foundation stone of the General Motors plant followed in 1980. In 1982 General Motors started operations in the newly built premises. Today Opel Vienna employs about 1.500 workers manufacturing engines and gearboxes in a three-shift operation.

Today the General Motors plant is included in the site of Seestadt Aspern, Europe's largest urban development projects, where the main emphasis is on technology. Aspern has a long tradition in the field of technology, not least due to the well-established Opel Austria works. Other R&D firms already on site are Research TUb, a technology transfer company based at Aspern IQ that forges links between innovative SMEs and entrepreneurs, research institutions and knowledge carriers; and the research company Aspern Smart City Research.