The largest airport in Austria and the surrounding region to the east was presented by Dr. Günther Ofner, one of the two managing directors of Flughafen Wien AG. 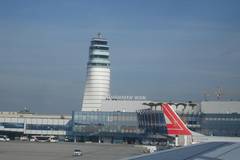 The CdH delegation was welcomed by Dr Günther Ofner, one of the two Managing Directors of Flughafen Wien AG. Flughafen Wien AG is the owner and operator of Vienna International Airport, by far the largest airport in Austria. It was in 20th position last year in the European ranking with 22,5 million passengers in 2014. With its daytime and off-peak connections to all capitals of Central and South-eastern Europe it is the most important airport in the region. This is of utmost importance to the 310 multinational companies with headquarters in Austria serving Central and South-eastern Europe.

In his talk, Managing Director Dr Ofner pointed out the importance of the airport in generating 8 billion EUR for the region and especially the province of Lower Austria. The Vienna International Airport contributed 4% to the total GDP of Austria in 2014.  Altogether some 20,000 workplaces depend on the airport. Vienna International Airport is one out of 9 airports in Europe with a 4 star quality ranking.

Dr Ofner emphasized that around 50% of the 260.000 ton per year production volume of the industries situated in the region are exported by plane for just in time delivery via the Vienna hub. Also, Vienna is the geopolitical hub for the Korean automobile industry, along with other car producers. Examples of other goods transported by airfreight are electronic components, consumer electronics, and even roses from Kenya. With a stable volume in tonnage but ever rising value, freight transportation makes some passenger flight connections economically viable or profitable.
Flughafen Wien AG has currently 5,000 employees coming from 52 nations.

Austrian Airlines, founded 1957 and now (since the end of 2008) a subsidiary of Lufthansa, has its headquarters in the grounds of the Vienna International Airport where it also maintains its flight operations hub.  To what extent the new Lufthansa-subsidiary Eurowings will operate out of Vienna is currently under discussion.

However Dr Ofner also called attention to the over-regulation in Austria and difficult political situation  concerning approvals for airport development. For 11 years Flughafen Wien AG has been pressing for the administrative approval of a third airport runway, which has been blocked by other parties. Procedural costs have reached 22 M Euros for the additional runway so far with no tangible result yet.
Currently airlines such as Emirates Airline, Etihad Airways, Qatar Airways and Turkish Airlines keep growing fast. Dr Ofner expressed the opinion that the European policy versus aviation is far too negative, thus limiting its growth, whereas at the same time air traffic is growing fast in all other regions of the world.

The shares of Flughafen Wien AG have been rising impressively over the years and continue to do so. 60% of the shares are in private hands, and, of those, 29% were recently bought by an Australian investment fund, 11% are in free float and 10% of the shares are owned by the employees. The remaining 40% of the capital of the company is held by the provinces of Vienna and Lower Austria, holding 20% each. Hence Flughafen Wien AG is predominantly a private company.

According to Dr Ofner plans for the immediate future are the erection of new hotels and additional office space especially for the growing number of cargo partners. 250 companies have their offices on the airport premises now, with more to come. Flughafen Wien A.G.'s EBIT margin has improved from 30% to 40%. The airport offers more efficiency and better quality now.
The railway connection to Vienna and western parts of Austria to and from the airport have been greatly improved, however the direct access to the airport for trains arriving from Eastern European destinations still needs improvement. Potential projects are currently under review.
After the detailed overview airport's business situation, its development and future plans given by Dr Ofner, the delegation was taken on a bus tour inside the airport area showing installations such as hangars, fire services, the terminal for private planes, international terminals 1 and 2, as well as the new terminal 3 with 17 terminal fingers, and the airfield with its two runways.