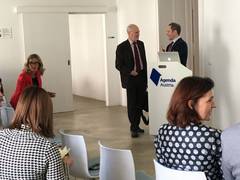 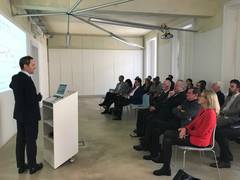 Our second event this year was a visit to Agenda Austria, the first think tank of its kind in the country.
Agenda Austria was set up in 2013 to shed light on the country's social policies and its economy, and to devise innovative responses to the key challenges we face. The team of Agenda Austria is fully independent of the state, political parties, professional associations and interest groups and is a privately funded organization.

Agenda Austria carries out detailed academic studies, and has complete freedom when it comes to choosing the topics they focus on. Its financial backers have no influence over Agenda Austria?s academic activities.

Agenda Austria was founded to open the country in economic and socio-political concerns and to provide new answers to the major challenges. One of those is the rising per capita debt level in comparison to the GDP, the so called debt burden trap. Austria's per capita debt rises five times as high as Austria's GDP does, as Dr. Schellhorn pointed out ( = figure 5).

Another challenge is the Austrian pension system with rising costs and shrinking workforce to finance the system. The Austrian pension system is becoming a barely affordable burden on the entire economy. In real terms though, sooner or later the government will have to spend twice as much money subsidising the system by means of federal grants than it does today: About 20 billion Euro  ( = figure 20).

But the fundamental reason for this is actually something to be happy about: an increase in life expectancy of three months per year.

As far as the young people are concerned for example, there is another interesting fact: due to migration about roughly 30 % (= figure 30) on average of the Austrian pupils don't use German as their informal speech (From Burgenland 16,6% up to Vienna 51,2%). Whereas Dr. Schellhorn criticized the fact the kids refuse to speak German all the time, some of the trade delegates, listening to his presentation argued that multilingualism could be a tremendous advantage on the other hand.

A lively discussion about different interpretation possibilities of the various statistics shown by Dr. Schellhorn led to the conclusion that every coin has two sides.