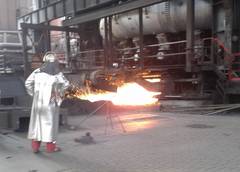 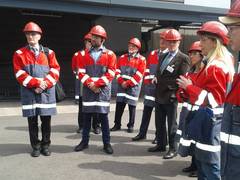 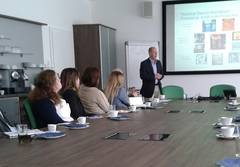 At Voestalpine Schienen GmbH in Leoben-Donawitz our group was welcomed by, Dr Martin Platzer, Head of Strategic Marketing and Business Development. Voestalpine Schienen GmbH has the most modern rail rolling mill worldwide. It was commissioned 2006 and represents the global industry benchmark.The rails produced by this plant up to now would span the globe several times. Customer benefit includes high product and service quality, and the fact that Voestalpine Schienen offers the largest product range of all rail manufacturers, including numerous special profiles.

In 2009 another industrial milestone was set by the construction of a completely new heat treatment facility. The company's patented cutting-edge technology allows the production of heat treated rails at consistently high quality in synchronisation with the rolling cycle, which is a unique feature in comparison with other manufacturers. Likewise Voestalpine Schienen is the only manufacturer in the world that supplies heat treated rails in maxi-lengths up to 120 metres.

During the visit the CdH delegation was given a guided tour the heat treatment facility, along with a tour of the one of the blast furnace units during the furnace tapping process.

Our next stop was the Technology Centre Leoben of the Vienna-based RHI AG (formerly known as Radex-Heraklith Industriebeteiligungs AG). The company was founded in 1834. In 1881 Magnesite was discovered in Veitsch, Styria, and in 1899 Veitscher Magnesitwerke AG was founded. In 1993 the companies Radex Austria AG and Veitscher Magnesitwerke AG merged.

After Vesuvius (UK), RHI AG is the second largest producer of refractory products worldwide, well ahead of other producers. Yearly around 1,7 Million tons of refractory product and related functional products are manufactured. 60% of the refractory market is comprised of steel producers. Refractory products protect furnaces against thermal, mechanical and chemical stress. Refractory demand is currently driven by strong growth in the emerging markets. RHI is well positioned, being a vertically integrated global provider of high grade refractory products. In 2014 the company's revenues reached Euro 1,721 million and an operating EBIT of Euro 142 million. The company has 32 production sites world-wide with more than 8.000 employees. RHI is a global partner for more 10,000 customers in more than 180 countries. It holds technological leadership with close to market R&D facilities and tailor-made products.

Company representatives Nathalie Berquet, Dr Christian Majcenovic, DI Christian Artner and Mag. Dr Dean Gregurek gave us an overview of the activities of RHI and showed us through the Technology Centre Leoben situated in two locations within the town.

The last organization visited by our delegation on this excursion was Montanuniversität Leoben. We were welcomed by Erhard Skupa. Head of Public Relations, and were given a presentation by Ms Sophie Zeiler, explaining the history as well as the current developments and scientific achievements of this most successful and world renowned University of Metallurgy and Mining.

The dramatic development of mechanical engineering and transportation at the beginning of the 19th century meant that Alpine mining and metallurgy needed to step up a gear. This was only going to be possible with academically trained experts and therefore the curators of the Joanneum, a technical university founded by Archduke Johann in 1811, submitted a proposal for the foundation of a university of metallurgy on 16 November 1814 as imagined by Archduke Johann himself. The first site of the university for metallurgy, opened 4 November1840, was in Vordernberg, the most significant Alpine iron mining site at the time, with strong support of the Archduke. In 1849 it was relocated to Leoben. By 1969 the University of Mining had 25 institutions for six different fields of study: Mining, Mine Surveying, Petroleum Engineering, Metallurgy, Mineralogy and Mechanical Engineering. In 1970 Polymer Engineering and Materials Science were added.

The University celebrated its 150th anniversary in October 1990. Two new fields of study were also established: Applied Geo-science, and Industrial Environmental Protection Waste Disposal Technology and Recycling. Industrial Logistics was established in 2003 and the Bachelors programme in Industrial Energy Technology was established in 2012 (the Masters programme having been available since 2009). Two new degrees were launched in 2014: the bachelor's and master's degree in Recycling, and the Joint Master's Programme Advanced Mineral Resources Development, the latter of which is held entirely in English. There are 16 university departments for postgraduate education.

Based on the 1975 Austrian University Organisation Act, the University of Mining has been known as Montanuniversität Leoben since 1 October 1975. Having crossed the 1000-student threshold in 1981, student numbers for 2012/13 reached approx. 3,300; the highest since the university was founded. Montanuniversität has offered only Bachelors and Masters programmes since 2011/12. The Bachelors programmes run for 7 semesters, ending with the academic title "Bachelor of Science", while the subsequent Masters programmes run for 3/4 semesters (depending on the subject chosen) and end with the academic title "Dipl.-Ing.".

A new record in the number of students was reached with 3,700 in winter semester 2014. The old district court building was converted into the Roh- und Werkstoffzentrum (RWZ) faculty in 2006. The new IZW (Impulszentrum für Werkstoffe) was opened in 2007. This houses the academic organisational units, the MCL (Materials Centre Leoben) and PCCL (Polymer Competence Centre Leoben) competence centres and administrative organisational units for Montanuniversität were linked together via a glass bridge. The renovated lecture theatre wing, with its Erzherzog-Johann-Auditorium was reopened in Autumn 2009. The Polymer Engineering department relocated to the new Zentrum für Kunststofftechnik Leoben in Spring 2010. The former Voestalpine research and data-processing centre has now been converted into the Kunststofftechnik-Institute. The Impulszentrum Rohstoffe (IZR) opened in 2011, housing the research activities for the Mineral Resources Engineering and Petroleum Engineering departments.