WIFO is Austria's leading institute for applied empirical economic research invited the CdH to presentations, talks as well as Q&amp;A about the economic forecast 2017/2018, economic growth and industrial policy. 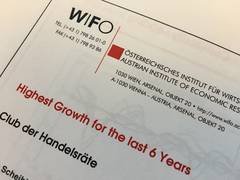 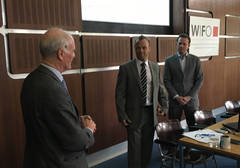 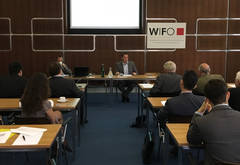 Founded in 1927 by Friedrich August von Hayek and Ludwig von Mises, WIFO analyses and forecasts economic developments in Austria and abroad. WIFO is a non-profit organisation that conducts its scientific work independently of politics and business. The findings of its research activities are designed for use as underpinnings for economic policy and entrepreneurial decision-making and to elevate the economic policy discourse to an objective level.

The Trade Delegates were welcomed by Dr. Marcus Scheiblecker, Deputy Director of WIFO, who's  scope of work is analysis of Austrian and international economic developments, the business cycle and growth, national accounts, and short, as well as medium-term forecasts.

Dr. Scheiblecker gave an overview about the economic forecast in general, with growing export rates in most of the countries, and for Austria in particular, where he valuates the current situation much better than the expectation was: "The Austrian economy shows strong increasing growth rates. Though the second quarter was a bit waeker, the economy shows strong growth again now. A second wave is expected due to growing wages and a better labour market. The very strong employment momentum strengthened further in the summer." At the same time the economic indicators remained at very high levels. "Generally the consumers are in a better mood and spend more money. Even in the US the confidence level is high", Dr. Scheiblecker said.

Klaus Friesenbichler, co-ordinator of the WIFO-research groups Industrial Economics, Innovation and International Competition, gave insights into the strategic positioning of Austria's manufaturing firms, including an analysis about industrial policy in Austria.

The Austrian manufacturing industry, the backbone of Austria's productivity, is marked by a good integration into international value chains, with a high level of export shares: 57% of the companies report 75% export shares and more, with trading partners in the EU, OECD countries and BRICS. Quality leadership and niche strategies dominate their strategic orientation.

WIFO itself acts as a national contact point for international institutions like the IMF, OECD, EC as well as for international rating agencies (Moody's, Standard&Poors, etc.) concerning national economic developments and the effects of economic policy measures. WIFO perceives its core task as serving as a bridge between basic academic research and economic policy applications that is built on a foundation of careful empirical analysis. There is no other facility in Austria that performs this task to any comparable scope or in a similar manner.