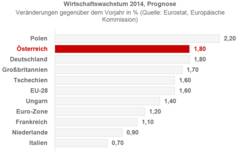 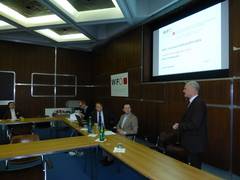 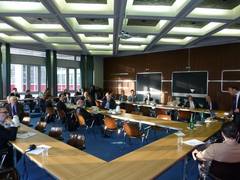 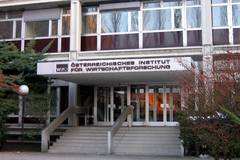 About WIFO:
As Austria's biggest policy oriented economic research institute, WIFO is charged with studying a broad range of economic issues. In order to render professional economic policy consulting services, it maintains in-depth scientific and institutional expertise in these fields.

WIFO directs its long-term research focus on a limited number of pivotal research subjects, while maintaining flexibility in its choice of research contracts and consulting work within these subjects.
Its expertise is bundled in five Research Groups which make up the core elements of WIFO's structure:

On the occasion of the visit of about 30 CdH-Members to WIFO (Austrian Institute of Economic Research) on 22.1.2015 three experts of the Institute presented recent data as well as an outlook concerning expectations on the development of the Austrian economy and of the world economy.
The first speaker was Dr. Markus Scheiblecker, Deputy Director of WIFO. His scope of work is analysis of Austrian and international economic developments, the business cycle and growth, national accounts, and short, as well as medium-term forecasts. He talked about the "WIFO Economic Outlook 2015-2016; a Tentative but Fragile Recovery".

Dr. Scheiblecker described the weak economic development in Europe during the last year compared to the substantial growth of the US economy, the development of the Euro versus the US$, and the development of oil prices; and he pointed out the reduction in industrial production. His expectations are that the volume of industrial production will not improve in the short term in Europe, as orders are low (order indicators negative). Exports of EU countries could rise to a small extent, whereas the cost of imports should be lower because of lower oil prices. The German IFO business climate index is down and the confidence indicator shrinking. According to Dr. Scheiblecker, Austria is in a similar situation with no positive development expected for 2015. The number of jobs has increased recently, however, mainly due to an increase part time employment. Unemployment in general rose during the last year.

The next Speaker was Dr. Christian Glocker who talked about "Raising Potential Output Growth in EU Countries"

He pointed out issues relating to restoring medium term growth, improving loan access and availability, addressing debt burdens and encouraging employment. As far as the loan situation is concerned, he mentioned the high rate of non-performing loans, for instance in Italy. In general he suggested alternative funding sources such as promoting equity financing thus reducing excessive debt burdens. In this respect, changes in tax regulation should be considered. Furthermore, he pointed out the necessity of labour market reforms, for instance in France.

The final speaker was Dr. Klaus Friesenbichler with his contribution "Can Industrial Policy Promote the Manufacturing Sector?"

In his opinion the manufacturing share should be around 20% of GDP. However the EU 28 have suffered a strong decrease. In countries like India and Brasil the share of manufacturing is even lower. Exceptions are Korea with 32% and China with 31% of GDP. According to Dr. Friesenbichler it has to be mentioned that, on a world wide level, the demand for manufactured goods is declining, the saturation level has been reached. There is high growth in productivity combined with liberalization of markets. Innovation and R&D  accelerates de-industrialization. Better services may help to raise production. New needs may generate new industries. However there are conflicting policy implications. Better quality jobs should be promoted. Finally, industrial policy cannot reverse structural change. International coordination is needed. New industrial policy should be with a focus on framework conditions and facilitating factors.