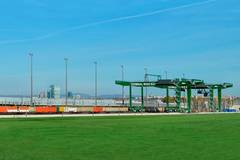 We were hosted by DI Erich Possegger,  general manager of the freight terminal, who gave us a very comprehensive presentation of the terminal, the strategy and functionality behind it.  The design concept of the terminal is based on the transshipment of the freight by heavy duty portal cranes from one train to another and is a departure from the classical marshalling yard concept whereby the wagons of goods trains are uncoupled and marshalled into new train formations.

Located at the junction of three of the main trans-European railway network corridors (TEN corridors), the new terminal facilitates faster rail-to-rail transshipment of freight along and between these corridors and the road/rail inter-modal transfer of freight for the transport of freight to and from all destinations in Europe but, in particular, the countries in the eastern half of Europe.  Most appropriately, many of the countries served by these TEN corridors were represented in our CdH delegation.

After the presentation, during which DI Possegger was happy to spend as much time as our delegation wished answering questions, he took our delegation out on site and showed us, at first hand, the layout and equipment of the terninal. The facility as it stands at present can handle 210,000 transport units per annum, but the site has sufficient area to double this capacity in the future.