The corporation runs one of the most successful and efficient urban transport systems in the world. 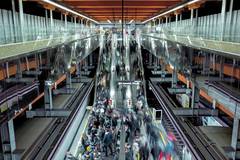 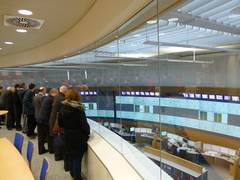 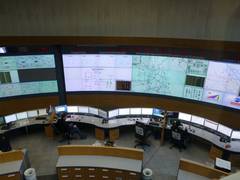 As a public corporation wholly owned by the city of Vienna, Wiener Linien is responsible for most of the transport infrastructure and associated vehicle fleets of the city.  The corporation runs one of the most successful and efficient urban transport systems in the world.

On 19 February 2015 the CdH were hosted by Wiener Linien at their headquarters in Erdberg, Vienna.  CEO, Dipl. Ing. Günther Steinbauer, welcomed the delegation and explained the current operations environment and the future challenges and objectives of his organization.

This introduction was followed by a presentation by Ms Ushi Theil, director of Strategy, Organization and Management Systems, in which she gave a comprehensive outline of the structure of the corporation, its responsibilities, its operations, and how it is financed.

Wiener Linien is Vienna's public transport operator and is responsible for some 140 underground, tram and bus lines. The corporation has a total of around 8,700 employees and is committed to providing the best possible service, and to thereby steadily increase the public transport share of city traffic. In addition to passenger safety and the environment, Wiener Linien highly values the welfare of its employees ? as befitting one of the largest employers in Vienna. Some 8,400 Wiener Linien employees work 24/7 year-round to provide reliable and timely transportation for passengers.  From 1993 to 2013 the share of individual journeys in Vienna catered for by public transport increased from 29% to 39%.  All investment and operating costs of the Wiener Linien are covered by the Vienna City Authority, apart from 50% of the investment costs associated with the building of new underground lines which is covered by the federal government of Austria.  In 2014, ?495m of the Vienna City Authority's contribution was offset by ticket revenues which have been steadily rising year by year.

In 2013, Wiener Linien ridership stood at 900 million passengers for the year. On average, some 2.5 million passengers per day use the Wiener Linien network, for which the corporation?s public transport vehicles cover a distance of 180,000 kilometers - roughly the same distance as orbiting the earth 4.5 times. With 39% percent of all passenger trips in Vienna made using public transport, the underground, bus and tram lines annually carry a higher share of the city?s passenger traffic than do automobiles.

Thanks to the latest expansion in 2013, the Viennese underground network now extends to around 78.5 kilometers.  A new extension of the network to the south of Favoriten (Vienna's 10th district) is currently under construction and is scheduled to become operational in autumn 2017.

After the corporate presentation the CdH delegation was treated to a visit to the central train control centre of the underground system.  Here the visitors were able to see the rail traffic controllers in action and follow, on large wall-mounted screens, the running of the underground trains on each of the railway lines.  Dipl. Ing. Panzera, who guided the tour, explained how the near fully automatic running of the trains was monitored and how the rail traffic controllers could intervene in the operation if necessary.