On 28 November 2019 we visited Oracle Austria GmbH, situated in the tallest building of Austria, the DC Tower 1 on the banks of the Danube. 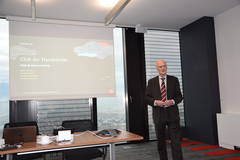 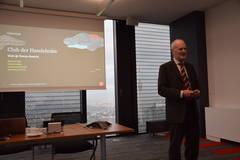 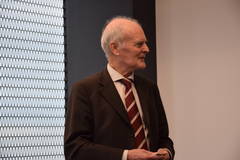 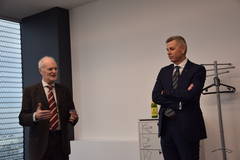 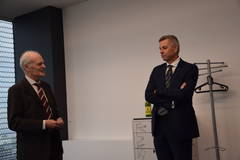 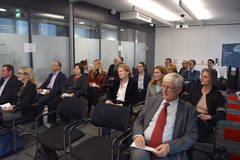 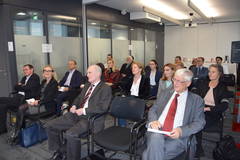 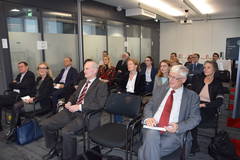 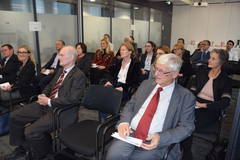 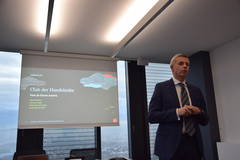 Oracle, headquartered in California, USA, is one of the world's largest computer technology corporations with an annual gross income of around US$40 billion. The company offers a comprehensive and fully integrated stack of cloud applications, platform services and engineered computing systems.  With more than 420,000 customers in 145 countries, Oracle provides a complete technology stack, both in the cloud and in the data centre.

Country Manager of Oracle Austria, DI Martin Winkler, gave us detailed information about Oracle on a worldwide scale from the founding of the company in Silicon Valley in 1977 onwards until today, followed by an overview of the main activities of  Oracle Austria GmbH. He pointed out that the company has a broad portfolio in IT-software and data base services for the financial sector as well as for public services. ELGA (the Austrian health insurance data system) runs on Oracle as does the Austrian financial fiscal transfer / revenue sharing system (Finanzausgleich). DI Martin Winkler spoke about technology trends that will change our lives and the enormous speed of innovation. Access to information is key, the internet is everywhere, the 5G bandwidth a necessity, especially to handle the volume of data which will be required for autonomous driving in the future. The demand for capacity keeps growing fast. He pointed out that Oracle Austria is successfully cooperating with the Economic Computer Science Institute of Johannes Kepler University, Linz, in various research projects. Oracle is recruiting employees among the best of the respective academic year at the Institute.

In a vivid discussion we talked about mobile devices, speech interface, consumer led digitalization, data growth, data privacy, the fate of Nokia and Kodak vs. Apple and Microsoft, the rising competition from China and its so far unhindered purchase of high-tech companies in Europe such as robot producer Kuka. China is strongly promoting its various global strategies such as the Belt&Road Initiative. Europe should consolidate its policy and speak with one voice to China.

Other issues were chatbots, autonomous driving, virtual reality, autonomous databases, artificial intelligence, legislation and so on.

Oracle provides specialized sales forces for communicating with clients. It offers one stop shops and standard software. Oracle enjoys a very strong business model but there is a lot of competition around. Data base services and associated hardware provides 40% to 50% of the revenue of Oracle. Cooperation with Start Ups is of rising importance.

Oracle Austria GmbH provides services primarily to clients in Austria but, in doing so, also serves subsidiary companies of some of them in other countries, such as Erste Bank subsidiaries in CEE and SEE countries.

Finally DI Martin Winkler gave an overview of the activities of the American Chamber of Commerce in Austria, AmCham Austria, of which Mr. Winkler became President in 2018. AmCham has some 300 company members, about half of them Austrian companies with subsidiaries in the US and half of them US companies with subsidiaries in Austria. AmCham provides a network of experience, events, topics, and assistance with administrative issues such as visa applications, and cooperates with the Austrian Federal Economic Chamber.