The first CdH event in 2017 was the visit to the new established Headquarter of Erste Group Bank AG at their new location &quot;Quartier Belvedere&quot; 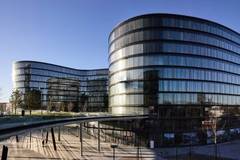 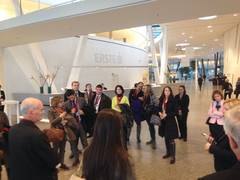 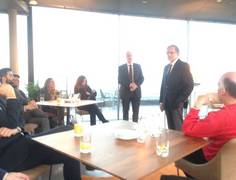 30 members of the CdH from 15 embassies and other institutions were taking part on 26th of January.

During an interesting guided tour through the impressive premises of the Bank we were also shown the new system of no fixed place for work. In this new system no employee including the members of the management board has his own work desk any more. This is because of the absent rate for business trips, vacation, medical and other reasons. Thus the Bank could reduce the number of the work desks by 20%.

DI Mag. Friedrich Rödler, Chairman of the Supervisory Board informed us about the activities of the Erste Group Bank AG in Austria as well as in Central and Eastern Europe.

After the demise of Communism, the company started a strong expansion into Central and Eastern Europe and by 2008 it had acquired 10 banks. In 1997 it went public and today the company is listed on the exchanges of Vienna, Prague and Bucharest and included in the indices CEETX, ATX and PX. On the 9th of August 2008, the former Erste Bank Oesterreich was split up into the newly founded holding company Erste Group Bank AG and the subsidiary Erste Bank der österreichischenSparkassen AG; the foreign subsidiaries were taken over by the new holding company. Erste Group now includes all companies of the Group.

In 2016, 4.500 employees of Erste Group, of Erste Bank Oesterreich and their subsidiaries in Vienna moved to their new headquarters "Erste Campus", close to the Upper Belvedere and the new Central Railway Station. The new location not only is offering ample space but also in close reach to the highways, the railway network and the Vienna Airport with its daily connections to all countries of Central, Eastern and Southeastern Europe.