From Rubber Pioneers to Global Player 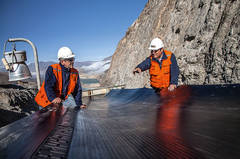 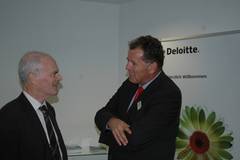 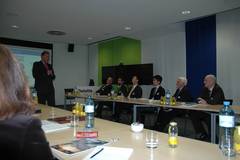 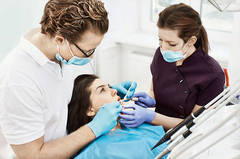 Mr. Thomas Fahnemann, CEO and Chairman of the Management Board of Semperit AG Holding introduced this long-standing Austrian company, which was founded in 1824, to the trade delegates and gave insights into Semperit's different industry sectors and business units, as well as the business strategy and it's motto "Semper it": there is always a solution!

Semperit's headquarters are located in Vienna. The Semperit Group employs more than 7,000 people worldwide, including close to 4,100 in Asia and more than 800 in Austria (Vienna and the production site in Wimpassing, Lower Austria). The Group has 22 manufacturing facilities worldwide and numerous sales offices in Europe, Asia, Australia and America. In 2015 the group generated sales of EUR 915 million and an EBITDA of EUR 96 million. Semperit was one of the first companies listed at the Vienna stock exchange, as Mr. Fahnemann trold the trade delegates.

The largest segment of the Semperit Group (43% of the Group revenue), Sempermed, is ranked among the international leading manufacturers of medical and industrial gloves. At Sempermed's research centre in Wimpassing, lower Austria, new products are continually developed and tested in close cooperation with users and experts. Mr. Fahnemann explained why the gloves are still produced in Austria: "For more than 95 years, Sempermed has been producing gloves of the highest quality and as the worldwide leader in technology we are setting standards in terms of quality and innovation. Sempermed guarantees optimum safety and reliability, highest production hygiene and strictest quality checks. In the fields of surgical gloves Semperit is leading in Europe. Right now we are launching a new glove weighing 3 gramme only."

Semperit's Semperflex segment develops, manufactures and markets hydraulic and industrial hose, rubber sheeting and wear resistant rubber worldwide. In plants in Austria, the Czech Republic, Italy, Germany and Thailand these products are manufactured with knowledge generated by many years of experience.

Sempertrans offers a broad range of high-performing conveyor belts for applications in the mining, cement and steel industries, as well as for other applications such as ports, power and heating plants, quarries and the chemical industry. Mr. Fahnemann gave an example of Semperit?s newest and outstanding developments in this sector: "Sempertrans has developed a completely new system for bulk transportation over long distances - the "Flyingbelt", a combination of ropeway and conveyor belt. The unique conveyor belt suspended on ropes connects a limestone mine in South Eastern Brazil with a cement plan. Under the most difficult topographical conditions, 1,500 tonnes of limestone per hour are transported at a height of up to 36 metres. The new "Flyingbelt", with a length of approximately 7 kilometres, is the longest in the world".

The Semperform segment is a leading manufacturer of moulded rubber and plastic goods, profiles, escalator handrails and anti-vibration membranes in the world markets. "This is our biggest business: every second escalator is equipped with Semperit handrails", said Mr. Fahnemann.

Semperit owes it's strong position to huge investments in R&D, in 9 locations worldwide with about 250 employees and various university cooperations - e.g. with Montanuniversität Leoben, Technical University Vienna, but also with universities in Singapore and many more. Significant ongoing investments into R&D allow continually improving quality and products highly adapted for todays markets.