The &quot;wooden tower&quot; outstripping the height of all previously built high-rises made of wood 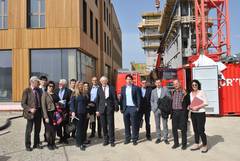 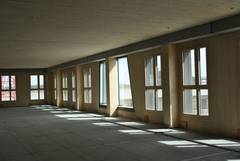 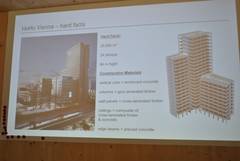 On April 12, 2018, the Club for Trade Delegates visited one of the most innovative timber constructions, the HoHo in Seestadt Aspern. The HoHo will be among the most remarkable buildings in this new business and housing area in the 22nd District of Vienna. Mr. DI Christoph Bauer of Woschitz Group GmbH, Civil Engineer, and Mr. BM Peter Gamperl of cetus Baudevelopment GmbH, Kerbler Group, presented to us the construction site and led us to upper floors of the building under construction.

Two visions timber construction and the idea of creating an unconventional building - were the starting point for the development and creation of HoHo Vienna. The often-studied, but never implemented idea of building a "wooden tower" will now be put into action in Austria's capital city, outstripping the height of all previously built high-rises made of wood.

Rethinking wood is the slogan of the Kerbler Group around investor Günter Kerbler and project developer Caroline Palfy. In the development phase, all the parties involved had one goal in mind, namely to show what can be done with wood and to establish HoHo Vienna as a showcase project for wood construction today.

19,500 square metres is the size of the rental space in the Seestadt Aspern area of Vienna on which the 84-metre tall wood hybrid high-rise is to be erected by 2018. Günter Kerbler is to invest roughly 60 million euros into this showcase project. Using wood to build to a height of over eighty metres is a civil engineering challenge and calls for highly accurate planning. There are hardly any high-rises made mostly of wood. HoHo Vienna is a pioneer building hoping to set an example that many others around the world will emulate
Wood is cosy, atmospheric and a natural building material that comes with many benefits: while wood itself is low in weight it has a tremendous weight-bearing capacity, is stable and elastic at the same time, offers versatile uses and benefits room climate because it can absorb large amounts of moisture and release it back into the environment. Just one example: A fir-wood cube with a length of four centimetres can carry four tonnes of weight. This makes wood stronger than concrete.

When you look at HoHo Vienna from the outside you are reminded a little of huge wooden blocks with a facade reminiscent of tree bark. HoHo Vienna not only looks sleek and exudes a natural charm, it also demonstrates creativeness when it comes to the use of space: the modular office format permits later individual changes that can be modified at any time without much effort.

THE HOHO VIENNA AS A SHOWCASE PROJECT FOR HYBRID CONSTRUCTION

The simplicity of the construction system used in the making of HoHo Vienna and the manner in which it combines different construction materials make up its appeal, with wood always taking a front seat. The system, which is kept deliberately simple, stacks up four pre-fabricated, serial building elements: supports, joist, ceiling plates and facade elements. The wood composite floors are secured to the building's supporting core structures and extend out to the facade. The serial elements that make up the wood composite floor structures are supported by wooden columns in the outer facade layer. The columns, in turn, form a common mounting element with the likewise prefabricated outer wall elements made of solid wood and the "earthy" mineral sandwich shell structure that forms the building's facade.