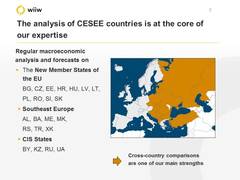 wiiw - The Vienna Institute for International  Economic Studies - is one of the principle centres for research on Central, East and Southeast Europe with 45 years of experience. Over the years the expertise was broadened to European integration, the countries of Wider Europe and selected issues of the global economy. At present its thematic work is focused on macroeconomic developments and structural change, international economics, labour markets and social issues, as well as on selected issues related to sectoral and regional economic developments. Wiiw is an independent, non-profit institution. Its staff serves the public and clients alike, delivering economic analyses and research, forecasts, statistical data and policy advice. Packages of its services are available for subscription.

wiiw has a team of highly skilled professionals, most of whom are multilingual and have an intimate knowledge of the region. Its economists and statisticians are often native to and permanently in close contact with institutions, researchers and policy makers in the countries they cover. Their greatest strength lies in the application of comparative regional and cross-country analyses.
The institute is uniquely positioned thanks to its wide range of statistical databases and expertise in dealing with complex of "difficult" dataset and data collection. Its analyses are based on primary sources and data obtained directly from the countries covered.
wiiw Annual Reports describe the institute's activities, employees, organizational structure and finances.
On the occasion of the visit of about 30 members of CdH to wiiw on September 20th 2018 Executive Director Ms. Elisabeth Hagen gave an overview of the activities of the institute mentioned above.

Here explanations were followed by the presentation of Economist Richard Grieveson on Central East and Southeast Europe. First he touched the situation of the Eurozone growing slowly wiht a good growth in Germany and a poor growth in Italy and France. He mentioned the fragility of the demand side and the inflation influenced by the oilprice. Mr. Grieveson pointed out that growth in the CESEE countries was very good in 2017 with a positive growth rate in all countries of the region for the first time since 2007. Only Russia was growing less. The outlook for the CESEE countries is still good however with a remarkable slowdown in Turkey. Serbia enjoys good growth, Russia is below Ukraine. In most countries labour markets are tight. In Turkey the currency collapsed and there is a huge Current Account deficit. FDI i slow with the uncertainty and missing legal security. A deep recession is expected in Turkey and the country must manage to roll over its loans.Economist Vasily Astrov informed about the situation in Russia. He pointed to the low growthrate of 1,6% and to the structural problems. The crucial bottlenecks are: Institutions, Innovations, Investments and Infrastructure. 140 Million people could not live on oil only. The efficiency is low and the corruption high. However contrary to 1998 the public debt is low. Interest rates were higher now, the deficit is kept low and the budget is balanced. The sanctions are damaging but their effect is only 2% of the GDP. The oilprice has a much higher impact on the economy. Politically Russia is successful but not economically. China could not replace Europe. Russia is increasing its agricultural output.
Concerning Ukraine Mr. Astrov mentioned the decline of GDP growth. The global environment was less well for Ukraine. The further cooperation with the IMF is necessary, but IMF wants higher gas prices which is a political problem ahead of elections. A general problem in Ukraine is low efficiency.

Please find the presentatons in our download section (members only)