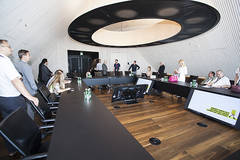 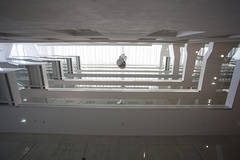 On 13 June 2019 a delegation of CdH members visited the new headquarters of Österreichische Post AG (Austria Post) next to the Rochus Markt in Vienna. Austrian Post is the leading logistics and postal services provider in Austria. Its main business activities include the transport and delivery of letters, direct mail items, print media and parcels.

The branch network of Austrian Post ranks among the largest private customer networks in the country, offering high-quality postal, banking and telecommunications products and services to its customers throughout Austria. The company makes an important contribution to safeguarding the nation's communications and logistics infrastructure based on its nationwide and reliable supply of high quality postal services on behalf of the Austrian population and economy. Moreover, Austrian Post is also represented by subsidiaries in eleven European markets, particularly in the parcel and logistics segment.

On arrival the delegation was greeted by Mr Peter Koller, Head of International Affairs of Austria Post, who began by explaining a little of the history leading up to the move of Austria Post from the previous sites at Haidinger Gasse and Schweden Platz to the new headquarters in 2017.  The new site consists essentially of two multi-storeyed buildings integrated into one. One half is a "listed building" which has been renovated as much as allowed under its historic protection status, and the other half is a completely new building constructed immediately adjacent to the other. As the old building was built with large spacings between the floors (typical of its time) and the new building was built with the smaller spacings typical of today to maximise floor area, the architects were presented with the interesting challenge of linking the floors of the two buildings with a bridging section between the two. So that the CdH visitors could see these aspects at first hand, they were taken on a tour of the buildings before returning to the conference room for three presentations followed by a question and answer session.

The first presentation was a company overview given by Mr Koller in which he explained that Austria Post consists of the following business units: letters, distribution of advertising material, parcels and logistics and points of sale; and finally corporate administration, innovation and development. In recent years the letter distribution business has been steadily falling. On the other hand the parcel distribution business has been growing, but not fully compensating the fall in the letter business. However, through development of other areas of activity and increasing efficiencies, the organisation has been able to achieve a good financial performance and expects to be able to maintain this performance in the foreseeable future. Considerable advances were being made in the area of environmentally friendly and efficient transport and logisics. Austria Post now has the largest company fleet of electric vehicles in Austria.

Then a presentation on "Investments and Shares Held in Other International Companies" was given by Mr Gregor Hueber, Head of Business Development and M&A, in which he explained that Austria Post has wholly-owned and partly-owned subsidiary companies in many central and eastern European countries, including Turkey. After some recent disposals of interests in other parts of Europe, Austria Post has significantly improved the profitability of its foreign operations. He also pointed out that they are steadily introducing more elements of electronic recording and payment transfer into their business processes.

Mr Koller then continued with a presentation about "Hot Topics in International Letter Mail Affairs". Here he described some of the challenges faced by Austria Post in complying with requirements laid down by the Universal Postal Union and in establishing agreement between parties in the value chain concerning the allocation and apportionment of revenues for letter distribution.

Light refreshments were provided and further discussion ensued between the CdH delegation and their hosts.