World leader in the mine detection sector and in the UAV sector. 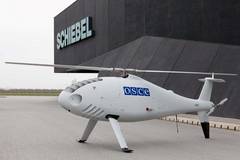 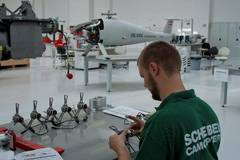 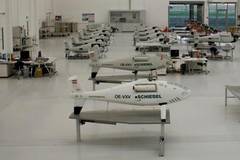 On 11 June 2015 the CdH was hosted by the company Schiebel, a prominent Austrian company in the design and manufacture of mine detection equipment, unmanned aerial vehicles (UAV's) and advanced composite materials. Schiebel is a world leader in the mine detection sector and, in the UAV sector, the company's "CAMCOPTER® S-100" is in operational use in a number of countries.

The club provided a bus to transport the delegation to Schiebel's manufacturing plant at Wiener Neustadt.  There we were received by Mr Peter Haueis, Head of Customer Support and Flight Operation at Schiebel, who gave our members a comprehensive presentation about the company and its products, with a special emphasis on the "CAMCOPTER® S-100" business.  It was explained that the "CAMCOPTER® S-100" is being used in surveillance operations, particularly with armed forces, in a number of countries around the world and is used in ship-based, as well as land-based, operations.  Advantages that the "CAMCOPTER® S-100" has over long-range fixed-wing UAV's are its vertical take-off and landing ability,and its ability to hover in stationary flight and to land on the moving deck of a ship.  Other applications include the inspection of industrial and infrastructure facilities, such as high-voltage electricity transmission lines.  It has a top speed of 130 knots (240 kph) and a flight endurance of around 6 hrs when cruising at a speed of 55 knots.  Fitting an external fuel tank can extend this up to around 10 hrs.  Maximum  flight altitude (service ceiling) is 18,000 ft (5,500 m).

After the presentation and an extensive question-and-answer session, the CdH delegation was given a guided tour of the company's "CAMCOPTER® S-100" production facility where the UAV could be seen in various stages of construction.  Included was a visit to the carbon fibre composite moulding plant where body sections of the "CAMCOPTER® S-100" are produced.