On June 1st 2017 the Club for Trade Delegates visited the Herold Druck und Verlag AG, one of the most modern printing houses in Europe. 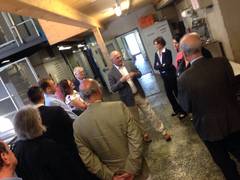 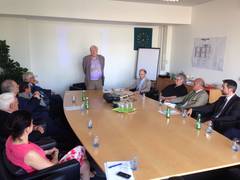 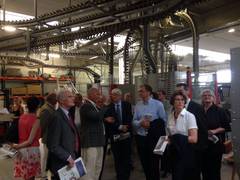 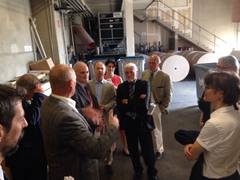 We were welcomed by its co-owner, Dr. Josef Taus, who has been an important political figure during the period of Chancellor Kreisky in the 1970ies as well as a leading Austrian business expert engaged in revitalizing companies in economic difficulties thus aquiring a successful business conglomerate.

Herold Druck und Verlag AG is one of the most modern printing houses in Europe. With 70 employees it produces daily newspapers such as Die Presse, Wiener Zeitung, Heute and several weekly newspapers.

The participants of CdH were informed about the company by Dr. Josef Taus, Mag. Hans Pfleiderer and Ing. Leopold Kurz, Members of the Board of P & V Holding AG and the Herold Druck und Verlag AG as well as Dipl. Ing. Ulrich Müller of Herold Druck und Verlag AG followed by the operational sightseeing. We could witness the start of the printing of Die Presse and especially Dipl. Ing. Ulrich Müller offered us a deep insight in the functioning of the printing house. After important investments such as an additional printing Tower and UV-dryer the main modernization followed in 2010. A new generation of printing machines was installed, the COLORMAN XXL autoprint, allowing the fully automatic production of different newspapers directly one after another. The printing house is offering additional services for its customers such as inline-baste, inline-post-it-fixing and newspaper garnish. Currently the processing speed including garnish in the newspaper has reached 90.000 copies per hour.

Our members were impressed by watching the start of the printing process, the speed of the output of the printing machines and the extremely short and efficient processing lines, not to forget the kind hospitality of the management and the employees.